A Fieldguide to the Common Marine Flora and Fauna of Ranong

You can choose to identify species by their taxonomy or their habitat: 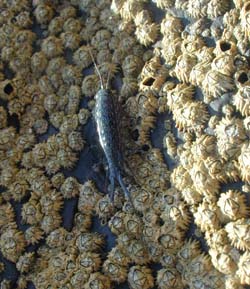 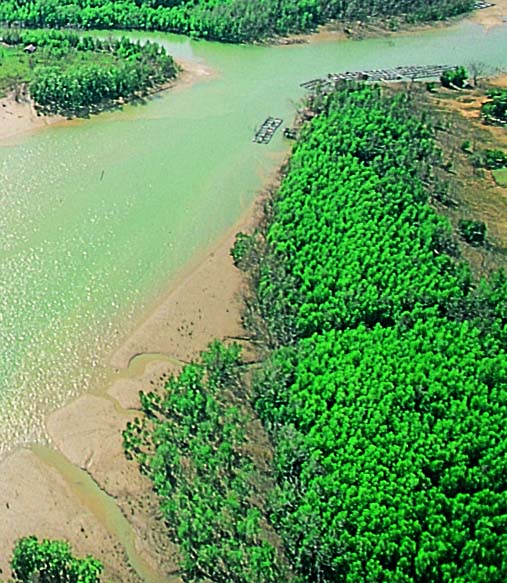 Ranong Province contains a complex mix of intertidal habitats whose distribution is influenced by physical conditions such as salinity, exposure to waves, currents and substratum. The rise and fall of the tides creates a gradient on the beach such that the upper shore only gets covered by the sea for short periods and is exposed to air for most of the time. The top of the beach is often exposed to extremes of heat and in the rainy season to dramatic drops in salinity. By contrast the bottom of the beach is only uncovered for a short period during low tides. The intertidal area between the land and the sea is particularly demanding for animal and plant life. Only species which are tolerant to drying out and exposure to air, heat and freshwater will be able to survive in the upper areas of the shore while others which are less able to withstand such conditions will be found on the lower areas of the beach. The resulting pattern of distributions can result in zones or areas each dominated by one or two particular species, often most obviously seen on rocky shores but also in mangrove forests and seagrass beds.

The dominant off-shore habitat in the area is sand and mud which covers vast areas. Coral out-crops are present around the islands but they are not well developed; probably due to the turbid water conditions. Indeed, along the eastern shores of Ko Ra there once was an extensive coral system which is now totally smothered by sediment. Subtidal seagrass beds are also found throughout the region. Physical variables such as current strength, substratum and wave disturbance from periodic storms have an important influence on offshore habitats. However, as physical conditions become more benign the presence of large burrowing organisms can have a profound influence on the distribution of other plants and animals.

Mangrove forests grow along shores sheltered from wave action and estuaries throughout the region. Mangroves have roots and stems that are able to tolerate being inundated by the sea. Different species of mangrove trees have adapted to withstand varying levels of salinity and exposure. This can lead to a degree of zonation such that some species such as Avicennia alba are found on the seaward edge of the forest, with Rhizophora apiculata occurs slightly further up the shore. Along river systems, as the influence of freshwater becomes greater, other mangrove species become established.

Seagrass beds are widely distributed in the area. The largest beds occur off Khuraburi in Tung Nang Dam and in the Laem Som National Park but beds also occur off a number of islands. They develop on soft sediment which they help to stabilise. Species of seagrass show different tolerances to exposure and so there is some degree of zonation. Species of Halophyla and Cymadocea are found intertidally, while Enhalus is usually sub-tidal.

Sandy shores are one of the major tourist attractions of Thailand. Long stretches of beach fringe much of the Thai coast and, often despite human activity, provide the home for a variety of invertebrate species. The type of sediment that forms a particular beach depends very much on the extent of wave action. Muds and sand are important habitats for wading birds. They are important feeding grounds as the biomass associated with some muds and sands can be very high. Different species of bird can feed on different species of invertebrate, their bills able to reach different depths to probe for suitable prey.

The rocky shores are quite restricted in the area, usually represented by outcrops where mountain and hilly ridges meet the sea or on headlands and points around islands. In relative terms rocky shores are a poorly study tropical habitat. Yet a relatively diverse fauna and flora can be found. Rock shores often demonstrate clear zonation patterns caused by plants and animals responding to the tidal gradient.